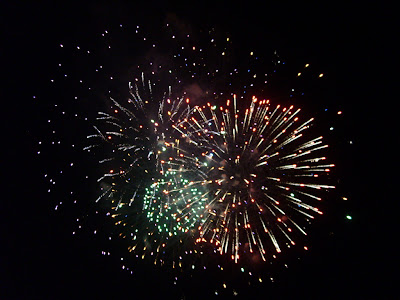 Ohhhhh….Ahhhhhhhhhhhh…This is one of our pictures of the fabulous fireworks display we went to see in the neighbouring village of Meuilley (the festivities rotate from village to village every year, and this year it was Meuilley’s turn) on July 13th. The evening was perfect – warm, clear and absolutely no breeze. We all plunked down on an adjoining wheat field and watched the show.
The next day, of course, was the annual village feast in Villers-la-Faye on the Place de la Salle de Fete. Franck had informed me previously that I was not allowed to book our plane tickets to Canada before the 15th, as this is a must attend event. Besides, last year he was declared the Village Champion of “Quilles” (kind of like a weird vertical bowling with huge wooden pegs and huge wooden balls) and he had to defend his title.
Franck had vaguely promised the girls that he would help them decorate their bikes to enter into the “flowered bikes” competition. They reminded him about fifteen minutes before we had to leave and I was amazed at what he was able to pull together with branches from our Bay tree, aluminum foil, and two stuffed animals. 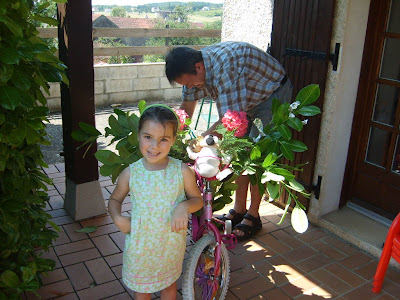 I’m glad I married someone so inventive in a pinch. Here’s Camille “working” on the bike with her Dad. 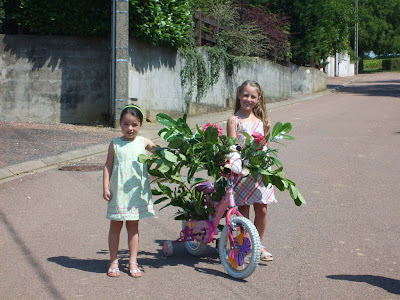 Here are the girls rolling the bike down the hill from our place to the Salle des Fetes. 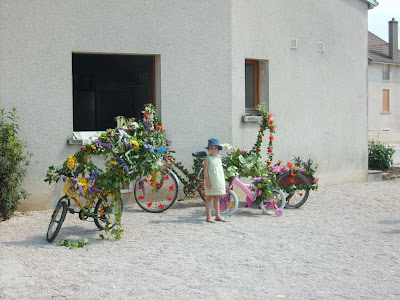 We were very relieved that when we arrived their was only one other bike, a meticulously decorated one that had clearly been done by an adult. Luckily there is a children’s prize and an adult’s prize. For a while Camille and Charlotte looked like they had the children’s prize in the bag as they were the only entrants, but unfortunately a few minutes into our feast a little girl came rolling in with what looked like the better part of a garden looped into a lovely arch above her bicyclette (including felt dragonflies fluttering in the breeze). Camille was quite perturbed as she seems to have inherited her father’s competitive streak. Here she is checking out the competition. She did quite a bit of picking and pulling on the flowers of the other bikes when she thought no-one was looking. 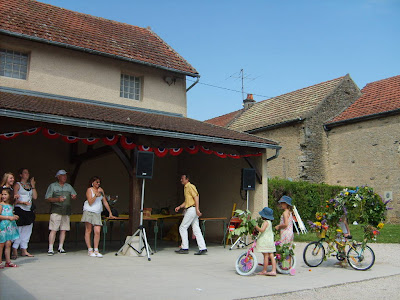 Finally the time for the competition came. Tensions were high and the other little girl looked rather smug. Camille, however, was still convinced she was going to win. As the judges were reflecting, the crowd broke out in a spontaneous chant of “UNANIMITE!” (aka “A TIE!”), so Camille and Charlotte (and Franck, vicariously) won. Charlotte chose a game of “Mikado” and a calculator and Camille chose a soccer set complete with ball, shin guards (went very nicely with her summer dress), goal markers, and fluorescent yellow goalie gloves. 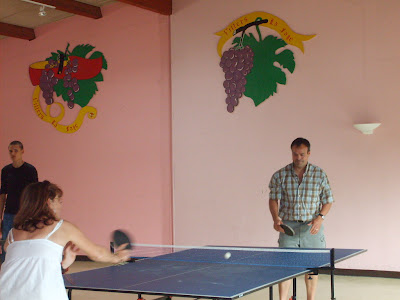 After that Franck got his ass whooped in the Ping Pong tournament while the girls played “Peche a la Ligne” for hours and won lots of treasures such as stick on glitter fingernails, water pistols, and garish costume jewellery. 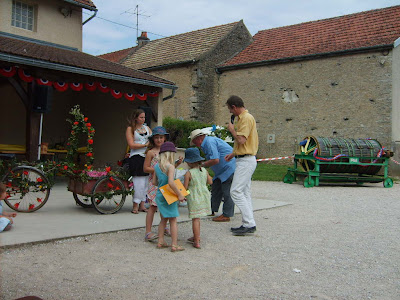 Then came the traditional book giving where every child in the village is given an age-appropriate book (that’s Pierre-Alexandre, the mayor, in yellow who is handing them out). Franck’s mother was telling me that they have done this for a long time, and she remembers getting her book every year when she was a little girl. 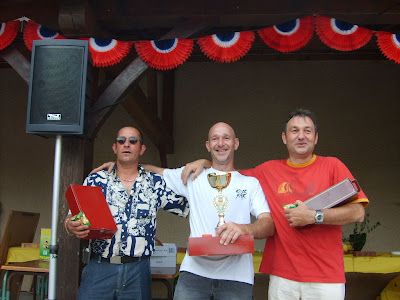 Then came the Quilles. Franck hit down three to begin with, an auspicious start, but then missed on his next two tosses. Luckily the girls saved the Germain family honour with their bike. Here is the new village Quilles champion (and neighbour of La Vieille Vigne incidentally) and the runners up looking very pleased with themselves. They better watch out, however, as Franck is determined to have his revenge next year. 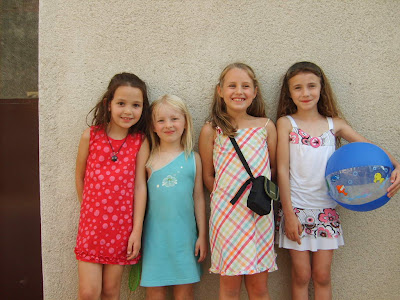 Here’s Charlotte with her new best friends she played with all day. That’s Justine, Lena, my Charlotte, and Clara. Justine is quite a heady acquaintance as she is allowed to ride her bike to the Place de la Salle des Fetes and play without her parents. Charlotte is harassing me already to be able to meet her friends there “by myself, without you!” as she so subtly puts it…Luckily I have a month to stall as we’re flying to Canada tomorrow for my little sister’s wedding and won’t be back until mid-August!