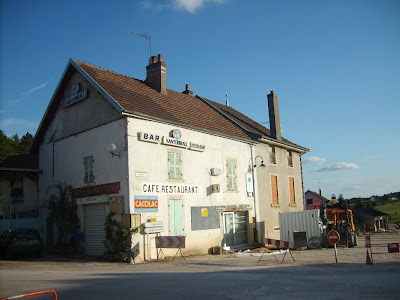 Since the late Spring the entrance to Villers-la-Faye, coming from the direction of Magny–les–Villers, has been getting a right ‘ole face lift. I was a little skeptical at first as the mayor’s office organizes and directs big projects such as these. You just have to take one brief glance at our village’s Stalinist Communal Village Hall, or Salle des Fetes, to see first hand evidence that in the past the aesthetic judgement of the mayor’s office can be, well, seriously misguided.

Granted, this neo-communist structure that blights my eyes every time I drive past (I haven’t included a photo, as I’m worried its sheer ugliness might break our camera) was a product of that 70’s decade which also birthed orange shag carpeting and avocado refrigerators. Still, the Salle des Fetes of Villers-la-Faye is a fine example of just how wrong communal decision making can go.
A more recent project was the place that was re-developed in front of the Mairie, the village’s version of Town Hall. There were many grumblings at the time about how the design was more suited to Paris, that city of the Louvre pyramid and La Defense, than that of a rural winemaking village. However, in retrospect I think the job they did was not too bad. The rock work is very pretty, and the kids absolutely love having a drink out of the old water pump in the centre every time we set out for a walk around the Mont-Saint Victor, which, believe me, is quite often. The rock fountain is also a nice touch, although I have to admit the blue lights embedded in the ground still haven’t grown on me. 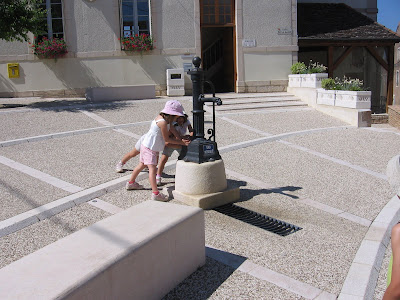 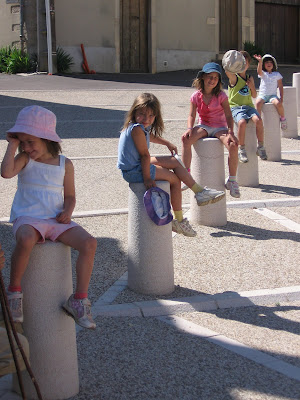 So we are all waiting with bated breath to see the upshot of the new village entrance – and this time around the stakes are high. Everyone wants it to be really nice, because since Jacky passed away this winter, Marie-Rose and Nicole have now closed Jacky’s store and restaurant and put it up for sale. 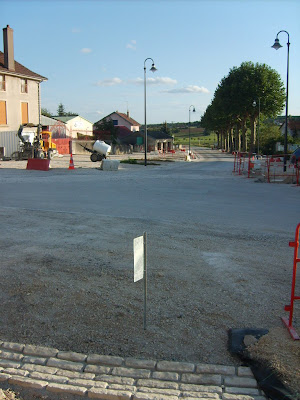 The entire village is hoping that it will be purchased by someone who will reinvent the store and keep it open, as well as keep the cafe / bar / restaurant alive. New rumours float around the village every week: a young couple from Lyon are going to buy it, oh no! Some developer wants to turn it into rental apartments, Whew, Someone from the nearby village of Echevronne is interested…in any case everyone in the village is hoping the business will be kept open in some way, shape or form, and it is commonly (and rightly, I think) believed that making the most of the village entrance, where it is located, is one of the best ways to attract the buyer that will do just this. 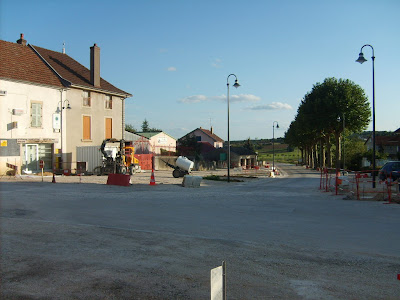 My friend Nina, an ex-financial advisor for high net worth clients who now with her husband Manu owns and runs the village dry cleaners, and I had cooked up the perfect plan at the 14th of July Bastille Day picnic. We would buy Jacky’s, transform it into a boutique grocery store with delicious bread, staples, and wonderful local products like wine, cheese, and honey. The restaurant would still serve lunch and the rest of the day would be a cafe and bar with tables and sun umbrellas when it as nice out, local artwork on the walls, and a open fireplace in the winter. It would be the heart and soul of the village and it would be wonderful…if only the pair of us had the money or time, which we definitely do not.
When we left for Canada in July there wasn’t much to see; the roads were dug up, and the new lampposts (nice old-fashioned black ones that I was pleasantly surprised to see) were put up, but that was it. We came back home hoping to see major progress but, of course, this being France the work crew had taken the entire month of August off and absolutely nothing had changed during the month we had been away.
Now, however, things are progressing quickly (well, as quickly as possible taking into consideration the 35 hour work week and daily 2 hour lunch breaks, that is). I really like the stones that line the road, as well as what look like numerous stone ringed dirt plots to plant trees and / or flowers. This is merely speculation as right now they are just filled with dirt and a few weeds, but I have high hopes some pretty things will be planted soon. There is also a lovely stone surround in front of the old village washing house and, as of today, a whole circle of old fashioned wooden benches around a lovely green water pump (the girls will be thrilled) in front of Jacky’s store. They’ve even put in new flower beds in front of the Salle des Fetes which somewhat soften its stridently communist lines.
All in all it’s looking good…now all the village has to do is find the right buyer for Jacky’s.