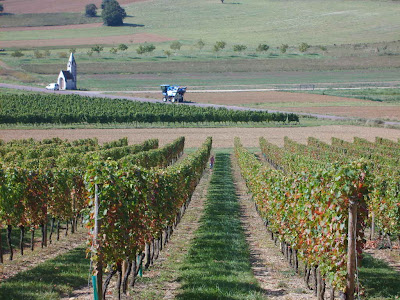 There are some days where all the vineyards in the world are still no consolation.

Sometimes I get the impression that people believe that just because we live in France our lives must be akin to an endless nirvana on Prozac. I blame this misconception largely on Peter Mayle.

His “Year in Provence” books and their spin-offs paint a picture of life in France so unrelentingly picturesque, quaint, and replete with endless culinary delights that no room is left for TSD’s, or “Truly Shitty Days” as I call them. Mayle’s vision is indeed seducing, and I must say I enjoyed his books on the whole. However, let’s be frank here: if you live live anywhere long enough (even France) rest assured that Real Life will get around to rearing its head and biting you in the rear end at some point.

Now I’m not talking about a life-changing bad day; one containing a terrible diagnosis or the death of a loved one, for example. While simply being human ensures that we’ll all experience these sort of days if we simply live long enough, what I’m talking about here is your more run-of-the-mill bad day.

And, as with most run-of-the-mill bad days, mine started with a VBM, or “Very Bad Mood”. Peter Mayle’s Provencale utopia doesn’t leave much space for truly vile moods, unless they are the kind that can be milked for comic effect, or to add a dash of local colour. As for mine, however, there frankly wasn’t anything very funny about it.

The night before I had enjoyed a generous helping of Franck’s celebrated Boeuf Bourgignon, and after a week of eating even more runny cheeses and decadent meals than usual due to a visit from my Mom and my Aunt Sharon, my gallbladder decided to mount a protest at around midnight.

Several hours of the wee morning were thus spent rocking back and forth on the couch and drinking copious amounts of mint tea to try and relieve the gnawing ache in my gut. The pain made it impossible to lie down and sleep, so I spent hours in the dark cursing Franck and his Boeuf Bourgignon, the rest of my family who were all sawing logs, and especially the bloody gastroenterologist in Canada who refused to take my gallbladder out years ago, insisting I only suffered from “sludge” (charming image) and not the stones that are apparently required to get rid of the cursed thing.

This nighttime couch stint also gave me the opportunity to have a panic attack about the upcoming renos that we’ll be starting in November. After years of wrangling and several migraine-inducing trips to the IKEA kitchen dept. in Dijon we had finally settled on a floor plan and kitchen layout that we both agreed upon, but the cost and the potential for making mistakes of it all terrified me. Our budget is coming out of our own pockets this time, so it is very finite and very small, especially considering the scale of the work we are planning on undertaking. Will the money hold out? Will it be well-spent or will we make some horrible, expensive mistakes? Would that dour plumber who looked at me with his hang-dog eyes when I explained our reno plans and said “wouldn’t it just be easier to build a new house?” prove to be right in the end?

At around 4:00am the mint tea finally did it’s job, or maybe my gallbladder just decided it needed some rest too. I crawled back in bed and fell into a fitful sleep for three hours until the alarm beeped at 7:00am.

I flung my arm across the bed and slapped the “snooze” button, but within seconds Franck was bouncing on the bed, eager to wake me up and share something…..