As you know my family have been visiting for the past three weeks. This is always chaotic fun, and as all my family without exception are as “gourmand” (handy French expression meaning people who have an undying love of fine food and drink) as Franck and I, this means we break out the good food and the excellent wine to celebrate their time in Burgundy.

This time was no exception. We did two wonderful winetastings, at Domaine Naudin-Ferrand in Magny-les-Villers as described in my last post and at our friend Charlotte and Marco’s in Volnay (Domaine Francois Buffet). Here are my sister Jayne and my brother-in-law Mark standing beside the barrels of 2006 wine that they helped harvest last year at Domaine Buffet. 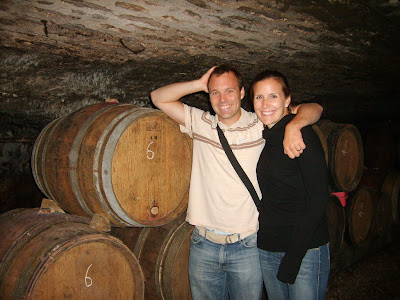 And here they are last year, harvesting the grapes that became the wine in those barrels. 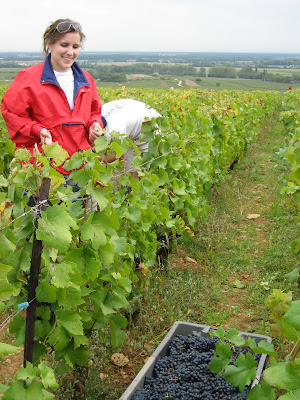 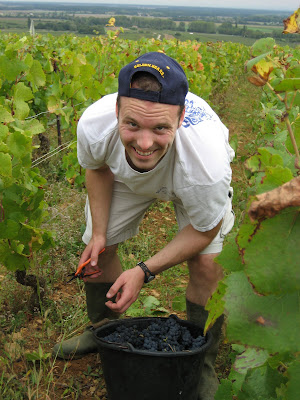 Over the course of my parent’s stay there have been some seriously phenomenal bottles that have been opened. Just a sample; several Hospices de Beaune wines, notably two bottles of phenomenal 1999 Meursault Cuvee Marie de Bourgogne, several Magnums of Claire’s (Domaine Naudin Ferrand’s) 1999 Cote de Nuits Villages, and to top it off a 1981 Chambolle-Musigny.

Naturally everyone drank and smiled and gloated over their good fortune…except pregnant me. Now, don’t get me wrong, I am absolutely thrilled to be pregnant, and once we finally decided to take the plunge and go for three kidlets instead of the standard issue of two I have never regretted the decision, although I admit I may need reminding of this after only sleeping five hours over three days as happened several times during Camille’s first few months.

Nevertheless my excitement over our baby doesn’t prevent the fact that I am experiencing a lot of “Inner Conflict” as it is called in the writing seminars I’ve attended when I watch everyone joyfully imbibe. For the first two months of this pregnancy I was feeling so wretched and nauseous that I could barely get down water without wanting to throw it back up again, let alone wine. However, now at five months the nausea has disappeared and my gourmand tendencies have come back with a vengeance.

I suppose I could become French about it like my dear friend Charlotte who is actually in the Beaune hospital in labour with her fourth child as I write this (will give you update on this as soon as I hear anything). Her typically french rule during all of her pregnancies was to generally not drink during the week (unless there was something really worthwhile in the offing), and to limit herself on the weekends to either one aperitif (i.e. kir) and one glass of wine, or two glasses of wine during a meal.

However, having had my two other pregnancies in Canada I suppose I have had the wits scared out of me for good by the no-drinking-during-pregnancy campaigns and stick by the rule that, besides the odd and very tiny sip of REALLY good wine just to taste, I don’t drink anything alcoholic.

But I have definitely come to the conclusion that in Burgundy, especially when family is visiting, this is much more tortuous than in Canada.